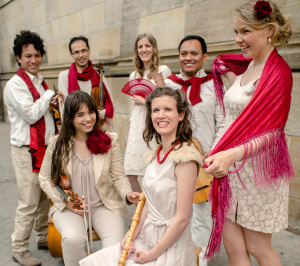 The ensemble Los Temperamentos was founded in 2009 and specializes primarily in music of the seventeenth and eighteenth centuries. The ensemble members hail from Hungary, Germany, Mexico and Colombia and their widely diverse backgrounds allow them to engage in a unique dialogue reflecting the intercontinental relations between European and Latin American societies that persist today on both a political and a musical level. In their concert programs, they combine the multifaceted musical styles of their respective cultural heritages in order to highlight the colorful richness of early music. In the past year, the ensemble has performed in such places as Dresden, Munich, Antwerp, Utrecht and Hamburg and, in April 2014 released their debut album De la Conquista y otros Demonios.