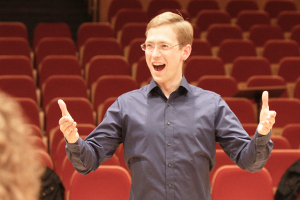 Florian Lohmann began his musical education as a member of the Hannover Boys’ Choir. He studied Music and German, Singing and Singing Pedagogy and was a scholar of the Academic Foundation Villigst. For his choral conducting studies he foremost worked with Frank Löhr and Jörg Straube. He gained further important inspiration from Anne Kohler, Walter Nußbaum, Paul van Nevel, Georg Grün and Frieder Bernius.
Florian Lohmann has been the musical director of Capella St Crucis and Collegium Vocale Hannover. He has been invited to national and international festivals and competitions and to recording and broadcasting productions in a variety of musical ﬁelds from historically informed performance to contemporary vocal music. Furthermore, in 2018 he conducted the BundesSchulmusikChor, a choir comprising music students from all over Germany. Concert tours led him and his choirs through several European countries, Argentina, South Africa and Australia.
Beside his work as a conductor, Florian teaches singing at the University of Music, Drama and Media in Hannover and choral conducting at the University of Music in Detmold.