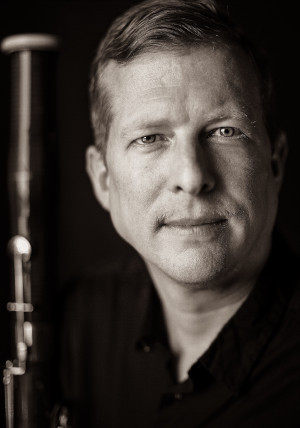 Berthold Große grew up in a family of musicians, took recorder lessons from the age of five and started his first bassoon lessons at the Musikschule Sondershausen (Thüringen) when he was eleven; his teacher was Wilhelm Barthels (d. 2009), solo bassoonist of the Loh-Orchester Sondershausen.

Even as a student, Berthold Große played in numerous orchestras; he was solo bassoonist of the Schleswig-Holstein Music Festival Orchestra and then for a long time a member of the Kammerphilharmonie at this festival. At this time he also played temporarily in the Loh-Orchester Sondershausen, Thüringen Philharmonie Suhl, Staatskapelle Weimar, Philharmonie Essen, Sinfonieorchester Wuppertal and Gürzenich Orchestra Cologne.

Berthold Große is a founder member of the Mozart-Sextett Weimar and as such was awarded a scholarship from the Deutscher Musikrat (German Music Council) in 1993. He is an active chamber musician with this ensemble and others, and is keenly interested in interpreting the seldom played soloistic repertoire for bassoon.

Since 2002 he has been acting solo bassoonist of the Royal Swedish Orchestra (Kungliga Hovkapellet) in Stockholm. In addition he is a welcome guest with many prestigious Scandinavian orchestras including the Oslo Philharmonic Orchestra, Oslo Opera Orchestra, Gothenburg Symphony Orchestra, Norrköping Symphony Orchestra and Norrbottens Kammarorkester in northern Sweden, one of the few orchestras in Europe that gives concerts north of the Arctic Circle!

Berthold Große plays a bassoon by Rudolf Walter, Pleidelsheim (No. 8584).