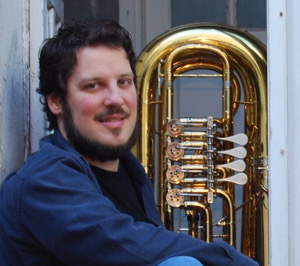 Patricio Consentino (born in Buenos Aires, Argentina in 1980) has become one of the most active musicians from South America, successfully establishing himself as an internationally recognised soloist, lecturer and director. He studied at the Hochschule für Musik “Franz Liszt” in Weimar, Germany with Walter Hilgers, as a scholarship recipient of the prominent Deutscher Akdemischer Austauschdienst (German Academic Exchange Service). After his appointments to the Orquesta Estable del Teatro Argentino de La Plata, Orquesta Sinfonica de Salta and the Dormunder Philharmoniker, he won the position in the Orquesta Sinfonica Nacional Argentina in 2009 and became the first ever Professor of tuba in his homeland.

In the last decade his activities as a pedagogue, soloist, chamber musician and director have taken him to Latin America, Central and North America as well as throughout Europe.  He is a member of the Enrique Crespo Brass Ensembles, the Brass Quintet Pampa Brass and the Dispar Trio.  Patricio has also worked closely with numerous South American composers for years to constantly expand the repertoire for  both euphonium and tuba.  This pioneering work is currently responsible for more than 250 new compositions and arrangements for Brass Ensemble by composers from Argentina, Uruguay, Paraguay, Chile, Perú, Brasil and Colombia.  In 2015, as the unofficial musical Ambassador of South America, he recorded his first Solo-CD “Sudamérica-Vibra” with new music for euphonium and tuba.

Since 2012, he has dedicated himself to training young musicians with a position in the Brass Band Academy Alicante (Spain).  During a masterclass in Germany in 2014, he was invited to continue the development of the Brass Band BlechKLANG as a conductor through his international experiences.  He has taken on this new challenge on with his characteristic energy and enthusiasm and the group has enjoyed great success.

Patricio Consentino is a Buffet Crampon “Artist” and performs on the following instruments: