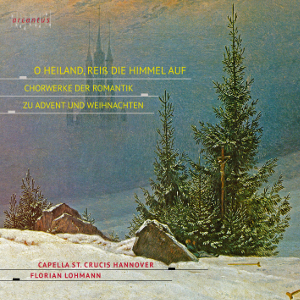 The choir Capella St. Crucis was founded in 1977 by Prof. Ulrich Bremsteller as a choir for music students and experienced amateur choristers. Under the musical direction of Manuel Doormann, Prof. Anne Kohler and – since 2011 – Florian Lohmann the choir developed in repertoire and excellence. Furthermore, the choir is supported by voice teacher Nils Ole Peters. Numerous prices and successes at the Lower Saxony Choral Competition (2005, 2009, 2017) are evidence of the choirs’s high standard. In 2018 the Capella was awarded 3rd prize in the 10th German National Choir Competition in Freiburg.

Every year, the choir presents several sacred and secular concert programs in Hanover and Northern Germany. Its size also allows for the performance of major oratorios and challenging a-cappella works from the Renaissance to contemporary, including commissioned pieces and world premieres with a marked preference for Bach’s choral music. Moreover, the Capella St. Crhucis is always searching for new artistic challenges such as unusual concert modes, for instance scenic productions or broadcasting co-operations. The choir has performed around the globe, including concert appearances in several European countries and Argentina. In 2019, the choir is envisaging a concert tour to Australia.